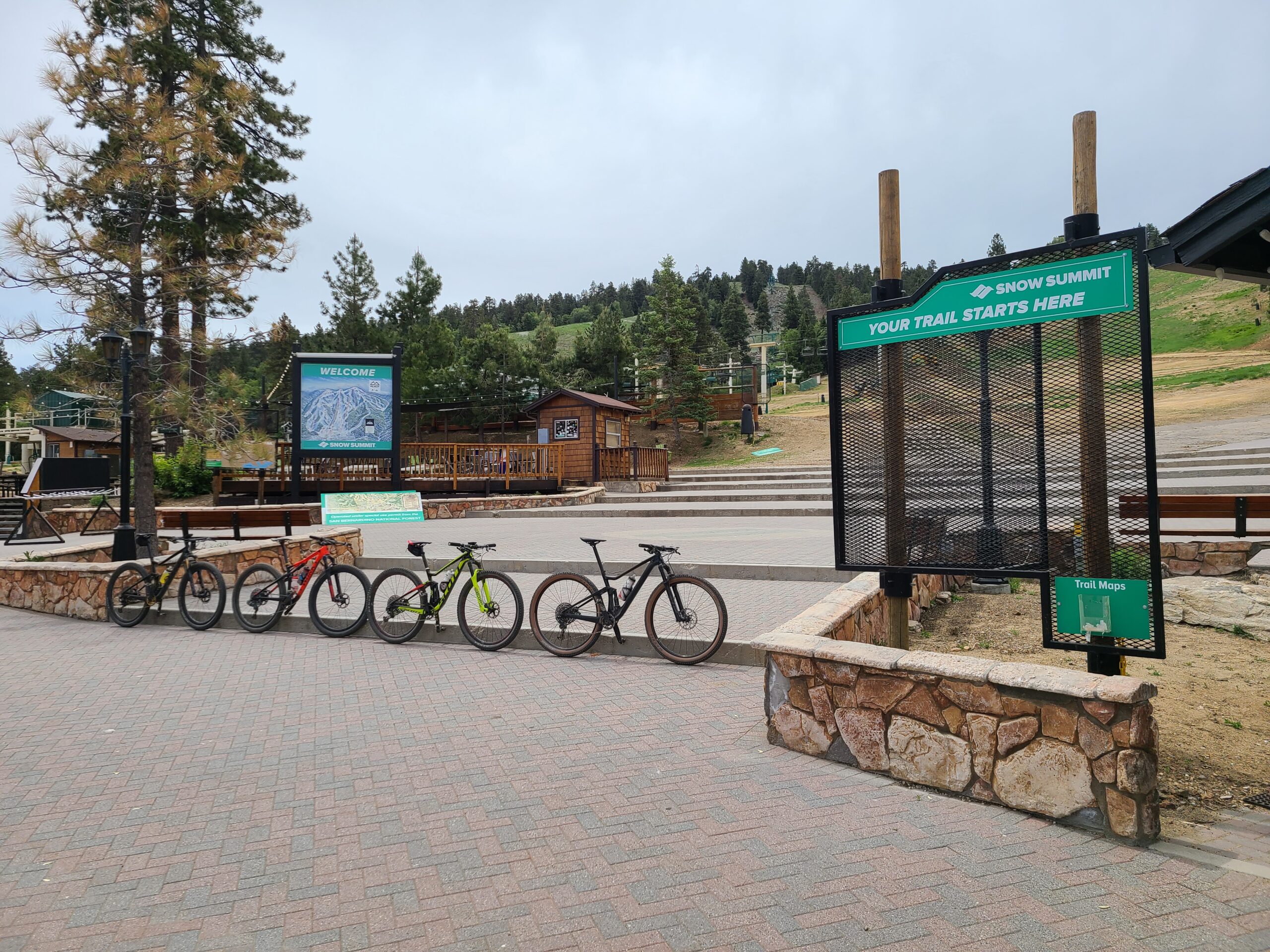 Going back to Big Bear, CA

More pictures and videos at the bottom of the page

As with every other year, the races return to Big Bear during the late spring and summer. I really love it up there and I could not wait to get up there. The first four stages of the state cup have already gone through and I am currently positioned in first place, so it give me some more motivation to train hard and to have fun for the races up there. I know than in order to do good in altitude, well I have to train in altitude. I planned multiple trips and was able to complete three trips before the first race in Snow Summit.

In April I went for the first time in 2017 to Angelous Oaks, which is a little bit down the mountain but still in the San Bernardino Forest. I rode the single tracks of the area and then decided to ride up Radford Climb. I noticed that altitude was playing small games with me since I was riding at a lower power and slower speeds while still suffering. But that was a good thing, since the whole purpose of the trip is to start getting used to those sensations. I had a not so horribly time riding up Radford, and arriving at the top I was greeted by a forest ranger that was just starting his way down. Another factor that made the climb worth while was that I found snow still at the top. After I took a couple of pictures, I rode part of Skyline and then make my way back down Radford. Usually I take the Seven Oaks single track down, but since I was by myself and we had some pretty strong storms last winter I decided not to risk it.

In May I wen back two times, once with Julio and the second time with Ale, and we decided to spend the full weekend up there (since it was Memorial Day Weekend). The first time that I went with Julio was a complete adventure, my cousin Juan decided to join us as well but he was going to go for a hike instead of riding bikes. We decided to start at the Big Bear Village, so that Juan would have more thing to do. After arrival, Juan went for his walk / hike while Julio and I hit the trails. I decided to show him the first climb of the Grizzly 100, which is another fun way to getting to the top of the mountain. Took us about 20 minutes, and quite a bit of acclimating / warming up but we made it. Being that we were both going to be racing the Kenda Series, we decided to go for a quick pre run of the track. Took the long course route which was very fun. On the way back however we decided to try the Seven Oaks single track, go down to the bottom of Radford and climb back up. This is a great climb for mental preparation as it does not stop climbing for close to an hour. Julio and I rode at a good pace and after a little over 53 minutes we completed the climb. We then headed back to the car, with our legs tired but with more energy to go on. We get to the car to find out that Juan was sick, his stomach was hurting and head hurting both clear signs of altitude problems. But we headed back and after some hours he felt good as new. We had some great memories and I knew that I was on a good path in my training.

The second time that we went back to Big Bear for training was on Memorial Day Weekend. We decided to stay for the weekend, but unfortunately did not find a place for our RV. After searching and searching we finally decided to stay at a Motel, which was not fun at all being that we were bitten by a bunch of bugs all over our bodies. So lesson learned, stay in the RV no matter what lol. More than a training trip, it felt more like a vacation for the first time. Even though we rode for 3 – 4 hours each day, we had so much free time up there and we took advantage of it. We went to the village, walked around, ate great food, drove around the lake like tourists and stopped to take picture and just to see new places and parks. I felt my legs in good shape, but Ale was feeling more the pain since it was the first time that she had gone up to Big Bear this year. Nonetheless we both put in great efforts, and we were set for the first round of the Kenda Cup up in altitude.

June comes along really fast, can anybody believe we are half way through the year !? And with this, the 5th Stage of the Kenda Cup comes; Big Bear #1. This time we were able to find a spot for the RV which was super, no more bug biting you at the middle of the night. We left on Friday evening to arrive late up there, giving us the opportunity to have more free time on Saturday. Saturday it was a easy day of riding, doing our last partial pre run of the track. The rest of the day was getting the equipment ready for racing, eating and resting. Sunday however was a totally different story, we woke up early and got ready to go to work.

The Race… I dont know if it is just me and Ale but getting to the race is never fun. Don’t get me wrong we love it and it is great afterwards, but those house before…. well let’s just say it’s not fun to be so nervous you go to the restroom every 15 minutes. We drove to Snow Summit at around 10 in the morning, being that the race started at 11:16 for me and close to 11:30 for Ale and Julio. We got all of our stuff ready, helmets on, shoes on, water on the bike, Garmin and camera on the mounts and started to head to the start line. This is a ride that takes about 30 minutes at an easy pace, with some climbing so it is perfect for warming up. I do believe that we went about 15 minutes early tho as we arrived there early. As with other races we went to our appropriate groups, and waited for the time to come.

The race started for me at 11:16 am on June 4th 2017. The pace started moderate and started to get faster and faster as the climb progressed. I was able to stay with the group for the first half of the climb, but I just did not had the legs to stay with them so I decided to go back and stay at my pace before I blew up. I ran a good average of close to 300 watts the first half of the race, and was doing better than what I had thought. By the middle part of it however there was a area of single tracks that I had not ridden before and it took me by surprise. I did it as fast and as flowy as I possibly could but I know I was not fast enough on it though. I was behind a couple of guys that were really good at climbing, but as soon as the technical areas started they slowed down. I guess they had intimidated me in the climbs and I though they were going to leave me behind. But after about 20 minutes and a couple of walk a bike stops since they could not make it I decided to go for it. The downhill was fun, passing a bunch of Cat 3 and 2 riders. And at the end I was able to finish in a 5th place. Ale did great and she got a 1st place in her category. She has been fighting for it all season long, and it was a good way of starting the races in altitude for the year. Julio got another second place in his category, I already told him next year Cat 1 as he is getting all podiums.

Two more weeks and we have to go back. June 18 2017 will be the second race in Big Bear. Hopefully I can do a better race time, I rode the course this last time in 2 hrs. If I do a minute better I am happy, to do so I introduced more intensity training and a extra training race the QuickNDirty #2 in Lake Hodges, Escondido. And I will have some recovery the days before, try to get a relatively balanced training stress score for it.

I’ll let you know how it goes! Here are some pictures and the video of the race for the meanwhile: